Beyond The Reef (Dvd)

Ever looked to the horizon and wondered what fish roam the ocean highways? Let us take you there on a wild ride in pursuit of giant game fish. Watch spearfisherman from all skill and age groups take on the deep oceans of the South Pacific and wrench at times monstrous pelagic fish from its abyss.

Darren Shields six times New Zealand Spearfishing champion and underwater cameraman, along with his friend Kane Grundy a fantastic spearo, cameraman and DVD editor put together footage that they and other dedicated divers have taken while their companions test their skills against the sometimes unforgiving open ocean and its inhabitants.

You will see the mens and juniorStriped Marlin records landed, Giant Pacific Bluefin Tuna over 500lbs being speared, New Zealand record Yellowfin being taken. Go from New Zealand waters to the South Pacific tropical islands where you will see Kane show a diver Dogtooth Tuna circling behind him which he shoots then gets dragged off. If this is not enough how about huge Yellowfin being taken while FAD diving. Watch a shark take a bite at Darren as hi fends it off with an open handed right jab.

Some footage is simply breath taking, you will be spell bound by the fish landed.

Do not buy this DVD and show it to your mother she will never let you near the water again! 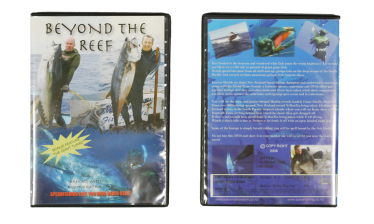