The Evolution of Freediving

In his second book, The Evolution of Freediving, Sonny Tanabe has created a definitive text for the sport. Fueled by a lifelong love affair with the ocean, this compilation of stunning photography, historic lore and modern information is sure to fascinate. With passionate detail, The Evolution of Freediving presents the art of apnea and spearfishing in concise and intriguing fashion. This book traces both the advances in dive equipment as well as the progression of the spearfisherman-from explorer to hunter to the current evolution as steward of the sea.

ABOUT THE AUTHOR / Richard "Sonny" Tanabe, a barefoot boy from the island of Hawaii, began his swimming career at a young age when he would join his uncle in diving off the coast of Hilo. His father talked him into joining the Hilo Aquatic Club under coach Sparky Kawamoto. Sonny was a Hilo High School All-American that went on to become an NCAA and AAU All- American at Indiana University. He was a member of the US Olympic Swim Team that competed in the 1956 Melbourne Olympic Games. After serving in the military, Sonny returned to Indiana University where he earned a Masters in Physical Education. He was an assistant Aquatic Director and Swim Coach at Hinsdale Township High School in Illinois before returning to Hawai'i where he he joined the faculty of the Kamehameha Schools. There, he served as a teacher and a coach for over 33 years. In addition to competitive swimming, spearfishing has always been an enjoyable activity for Sonny. Wherever he traveled he always found a way to end up either freedivng or spearfishing. This energetic waterman has been grateful to have enjoyed so many wonderful experiences whether in the ocean or in a pool. Sonny Tanabe is also the author of Spearfishing on the Island of Hawai'i, published by Editions Limited in 2007. 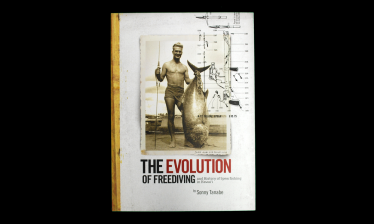