OCEANS IN ACTION an Out of Focus Production

On the Back Cover:

"The open ocean offers little mercy to those who venture out beyond the sight of land. Underneath the surface holds yet another unforgiving realm where predators constantly compete for food and territory. Enter the spearfishermen... out of place in the underwater foodchain, these divers turn the tide on what was once the hunter. Weilding heavy band-powered spearguns, this crew foregoes the bulky scuba tanks and dives head first into the depths after World Record fish."

"Out in the Gulf of Mexico off Tampa Bay, FL, the team pursues monster Amberjack and elusive Gag Grouper and Shanpper"

"Other locations include the waters off the coast of Oahu, Hi; Cape Hatteras, NC; and the Oil Platforms off of Mississippi and Louisiana." 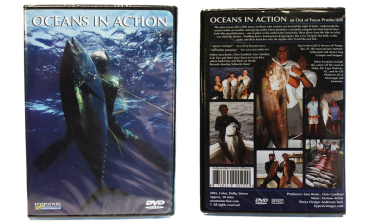